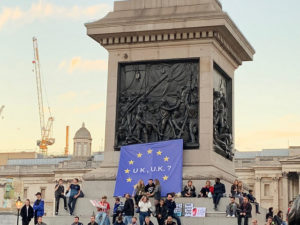 How to formulate the questions

Big demonstration on Saturday calling for  a second referendum1 on the result of the negociation with the EU, including the possibility of staying a member of the EU. But how could this happen?

In Britain, a referendum can only be called by an act of Parliament2. So to be realistic, the call for a referendum has to suit the needs of the various sides in order to be proposed and find a majority in Parliament: the Government, the Brexiteers, the Remainers (both of them in their various stripes).

There is a way forward (assuming an agreement will be reached by the end of the year between the Government and the EU Council – update: it has been done on 14.11.2018), which I can suggest loosely following the way we deal in Switzerland with a ballot on a  3-way question3.

Hypothetical question if the majority to the first question is No (choose only one):

I understand Theresa May doesn’t want a second referendum, nor do the Brexiteers. I think however that they can be won over if the vote is fair: May has nothing to loose to have the result of a negotiation backed by a popular vote5, and it is very possible she will win; the Brexiteers have a fair way to either vote yes or no to the first question and then choose leaving without an agreement; and the Remainers to either vote no or yes to the first question and then choose remaining in the EU. Update 16.11.2018: If, as it appears, Parliament is in complete meltdown about the way forward (with both Brexiteers and Remainers in total denial that this Withdrawal Agreement is the only one on offer under Art. 50) and neither a new Tory leader nor a Corbyn Government would change that, deferring the decision to the people seems the reasonable thing to do.

I honestly think it is impossible predict the result of such a referendum, but at least it would be a democratic way of sorting the relationship between Britain and the EU.

Multiculturalism (or is it intersectionality?) at it’s best - https://newlinesmag.com/first-person/marianas-son/

Lessons from California for the ideological left - https://www.persuasion.community/p/why-democrats-are-recalling-their

The trans extremists can be defeated - https://unherd.com/2022/04/the-week-the-trans-spell-was-broken/

The Left and Latin America: a comprehensive update - https://newlinesmag.com/reportage/in-latin-america-backers-of-leftist-dictatorships-look-the-other-way/

The promises and risks of using targeted ads and social media to « nudge » good behaviour - https://newlinesmag.com/reportage/governments-try-to-fight-crime-via-google-ads/

From the right to voice opinions to the duty to check facts - https://thecritic.co.uk/issues/december-january-2022/matters-of-fact-in-a-post-truth-world/

Tony Blair on what to do after the Afghanistan withdrawal - https://institute.global/tony-blair/tony-blair-why-we-must-not-abandon-people-afghanistan-their-sakes-and-ours